This article shows the differences between the individual Windows Server 2012 editions.

Windows Server 2012 pricing information about can be found at the Thomas-Krenn web shop in the area Microsoft software.

Windows Server 2012 is available in 4 editions:

The editions are suitable for the following application areas:[1]

(*) CALs are required for each user or device, who directly or indirectly accesses a server. Find more information on this topic at the Client Access Licenses site at microsoft.com.

The following are the minimal system requirements for Windows Server 2012 R2:[3]

(*) Servers with more than 16 GB of RAM will require more disk space for paging, hibernation, and dump files. 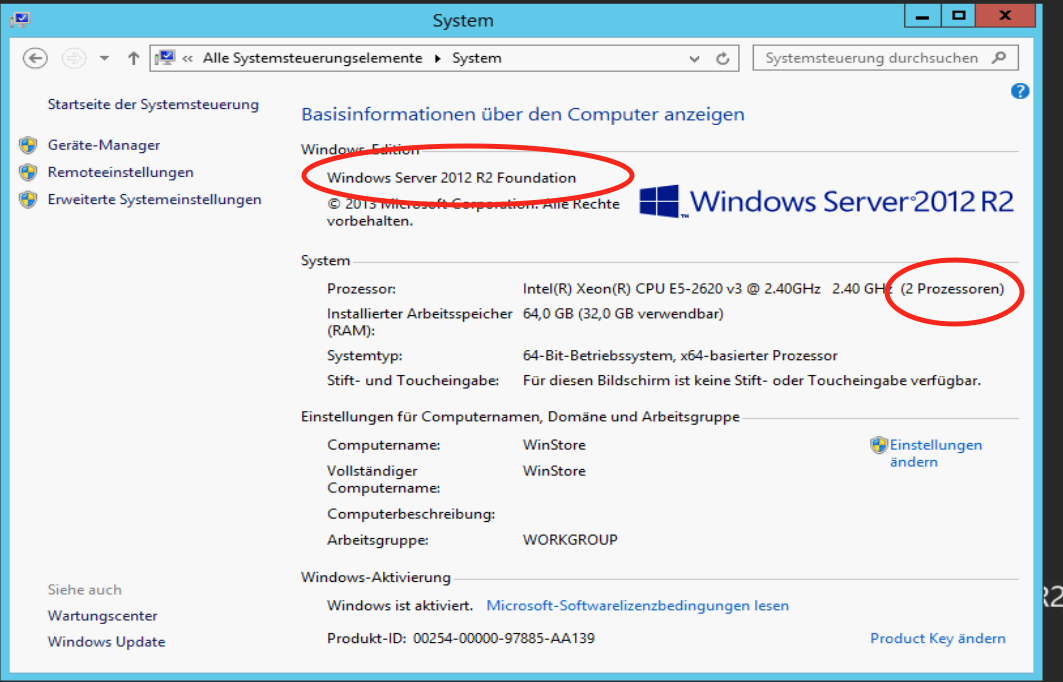 (*) When a customer is running all allowed virtual instances, the physical instance may only be used to manage and service the virtual instances.
(**) Essentials can be run in either a physical or virtual operating system environment “1 or 1.”

The Windows Server 2012 editions differ in the following server roles:[4]

(1) Limited to creating Certificate Authorities – there are no other Active Directory Certificate Services features (Network Device Enrollment Services, Online Responder Service). See ADCS role documentation on TechNet for more information.
(2) Must be root of ADDS forest and domain and have all FSMO roles.
(3) If ADDS role is installed, must be root of forest and domain and have all FSMO roles.
(4) Requires an incremental AD RMS CAL for access.
(5) The data de-duplication feature is not available.
(6) Limited to 50 RRAS connections, 10 IAS connections; DirectAccess and VPN are supported.
(7) Requires an incremental RDS CAL for access, with the exception of using the Remote Web Access feature of the Essentials edition.
(8) Only the RD Gateway role service is installed and configured, other RDS role services including RD Session Host are not supported.
(9) Limited to 50 Remote Desktop Services connections.

Creating and managing a Group Policy on a Windows 2012 Server
Retrieved from 'https://www.thomas-krenn.com/en/wikiEN/index.php?title=Windows_Server_2012_Editions_comparison&oldid=3236'

I recently needed to reproduce a customer issue in my lab environment. My lab is a Windows 10 workstation with the Hyper-V role installed. Part of reproducing the issue involved building out a Windows Server 2012 R2 Foundation virtual machine. I figured this would not be a problem as 2012 R2 runs fine as a virtual machine. This was not the case though. I ran into a major hurdle with the integration tools. I will describe the process I went through to get a Windows Server 2012 R2 Foundation virtual machine running smoothly.

Now before anyone goes out and tries the below procedure for a production system, please understand that running Foundation edition as a virtual machine is not supported by Microsoft. Also it will likely violate the EULA (End User License Agreement). Typically Foundation edition is only sold with an OEM license. That means it comes pre-installed on hardware and must remain on that hardware. So in order to do this, and not violate the EULA, a non-OEM license is required. I have a MSDN subscription and thus have a valid license. Additionally, I am not running the server for any type of production workload.

I started the process by creating a generation 2 VM (virtual machine). Unfortunately I found out this will not work as the VM bugchecked during setup. I deleted that VM and created a generation 1 VM. I was then able to get the Windows loaded. This is when I discovered the major hurdle I mentioned above. The VM responded very slowly to mouse and keyboard input. I also noticed severely degraded performance. This was to the point of the VM almost being unusable. The VM behaved as if none of the integration services drivers were installed. Unfortunately Windows 10/2016 do not have the option to insert the integration disk. I was able to get the vmguest.iso from a 2012 R2 hyper-v host. However when I tried to run the setup I was informed that the latest integration services were already installed.

At this point I realized this was not going to be easy, but I enjoy a challenge. I browsed the vmguest.iso inside the Foundation VM. I extracted the following file: D:supportamd64Windows6.2-HyperVIntegrationServices-x64.cab. I then went into device manager. I noticed quite a few, a dozen or so, unknown devices.

I then tried to manually load the drivers from the extracted cab file. While the driver was found, it was not signed. I figured no sweat, just disable driver signing requirement in the BCD (Boot Configuration Data). Yet another roadblock. It is no longer possible to permanently disable driver signature enforcement. I was able to boot into driver signature enforcement disabled mode. I then manually loaded drivers for all the Unknown devices. This corrected the input and performance issues, at least for that boot. Booting into normal mode caused all the issues to return.

Getting the drivers to load each time Windows booted was the final step in getting the virtual machine to run properly. I looked into the bcdedit command line options and was not able to find an option to boot to driver signing disabled mode. What I ended up doing was to add a dummy entry to the boot list and set the timeout to 30 seconds with the following commands.

Presently, on each boot I press F8 to get the boot options. I then select Disable Driver Signature Enforcement. Now the VM runs with all guest integration services.

If you have been able to find a better way to do this I would like to hear about it in the comments below.