The arch is part of an initiative to restore a million artifacts that ISIS destroyed in the Middle East. Out of a million artifacts, this was their first choice- the arch from the Temple of Baal- (also called Bel) a deity who is synonymous with Satan. Original arch of Temple of Baal The dates and locations seem to have special significance. The Arch of the Palmyra Temple of Bel (Baal) was standing in Trafalgar Square in London. Beltane Fire Festivals are held all over the world, perpetuated as part of ancient Gaelic culture. They are frequently billed as family events, with children being given special discounts.

Did you know that 4,000 world leaders from 130 different countries gathered in Dubai this week for the World Government Summit?

It was held from Feb. 12th to Feb. 14th, and it featured more than 100 internationally-known speakers including U.N. Secretary General Antonio Guterres, Christine Lagarde and Elon Musk. If you would like to know more about this shadowy group, you can visit the official website right here. The first World Government Summit was held back in 2013, and that one was actually attended by Barack Obama. Unfortunately, the mainstream media in the United States was almost entirely silent about this summit, so most of us in the Western world didn't even hear about it.

To honor the spirit of this summit, a reconstructed version of Palmyra's Arch of Triumph (also known as the Monumental Arch) was erected in Dubai. Previously it had been put up in London and New York City for brief periods of time, and so this marked only the third time that it has been displayed. The following comes from Breaking Israel News:

A replica of a Roman arch that once stood in front of the pagan Temple of Ba'al was erected for the World Government Summit in Dubai this week, creating a scene that one rabbi claims symbolizes the dangerous fusion of Ishmael and Edom against Israel.

The original Roman Victory Arch stood for 1,800 years in Palmyra, Syria, until it was destroyed by ISIS in October 2015. A full-size 28-meter tall replica of the arch was created last year by the Institute for Digital Archeology, a joint project of Oxford and Harvard universities, and has been displayed twice before.

The replica was erected for the opening of the World Government Summit that opened on Sunday in Dubai.

And of course 'Bel' and 'Baal' are synonymous, and both titles can be traced all the way back to ancient Babylon and a very evil ruler named Nimrod. The following is an extended excerpt from one of my previous articles:

In a previous article, I included a quote from Wikipedia that discusses how 'Bel' is an ancient Babylonian term for 'Lord' or 'Master,' and that 'Baal' comes from that original root word:

Bel (/ˈbeɪl/; from Akkadian bēlu), signifying 'lord' or 'master', is a title rather than a genuine name, applied to various gods in the Mesopotamian religion of Akkad, Assyria and Babylonia. The feminine form is Belit 'Lady, Mistress'. Bel is represented in Greek as Belos and in Latin as Belus. Linguistically Bel is an East Semitic form cognate with Northwest SemiticBaal with the same meaning.

The title of 'Bel' or 'Baal' seems to have originally been used primarily for the Babylonian god Marduk. Here is more from Wikipedia:

Bel became especially used of the Babylonian god Marduk and when found in Assyrian and neo-Babylonian personal names or mentioned in inscriptions in a Mesopotamian context it can usually be taken as referring to Marduk and no other god. Similarly, Belit without some disambiguation mostly refers to Bel Marduk's spouse Sarpanit. However Marduk's mother, the Sumerian goddess called Ninhursag, Damkina, Ninmah and other names in Sumerian, was often known as Belit-ili 'Lady of the Gods' in Akkadian.

So where did 'Marduk' come from?

Well, many scholars have traced the worship of Marduk all the way back to the historical figure of Nimrod:

Traditionally the Tower of Babel event has been associated with Nimrod, and Jewish commentaries as well as the Jewish historian Josephus both seem very emphatic on this point. Regarding the Sumerian name 'Enmer-kar,' the suffix 'kar' means 'hunter,' and so 'Enmer-kar' is in fact 'Enmer the Hunter,' just as Nimrod is referred to as the 'Mighty Hunter' in Gen. 10. Furthermore, Enmerkar is named on the Sumerian King List as 'the one who built Uruk,' just as Nimrod is described in Gen. 10:10 as having a kingdom that began in 'Babel (Eridu) and Erech (Uruk) ... in the land of Shinar.' After Enmerkar's death he became honored in Sumerian myth as the semi-divine hero Ninurta, and eventually this cult evolved into the great cult of Marduk, which became the state religion of Babylon after the conquests and religious innovations of Hammurabi.

Are you starting to see how everything fits together?

And Nimrod was the great king of the very first 'world government' in the post-flood world. The following is what Genesis 10:8-12 says:

Cush was the father of Nimrod. He became a mighty one on the earth. He was a mighty hunter before the Lord. Therefore it is said, 'Even like Nimrod the mighty hunter before the Lord.' The beginning of his kingdom was Babel, Uruk, Akkad, and Kalneh in the land of Shinar. From that land he went to Assyria and built Nineveh, the city Rehoboth Ir, and Calah, and Resen between Nineveh and Calah (that is the principal city).

So it seems more than a little bit strange that an arch with links to Nimrod has been erected to honor a summit devoted to the promotion of 'world government' in our day.

It has been said that if we do not understand history we are doomed to repeat it. Nimrod's world government in ancient times attempted to push God out of the picture, and the same thing is true with the globalists of today.

The globalists dream of a utopia where humanity has been united under a one world government, a one-world economy and a one-world religion. Donald Trump stands opposed to this twisted dream, and that is why the globalists hate him so much.

And the globalists understand the power of symbols very well. The erecting of this arch in Dubai at the exact same time the 'World Government Summit' was being held sends a very powerful message. 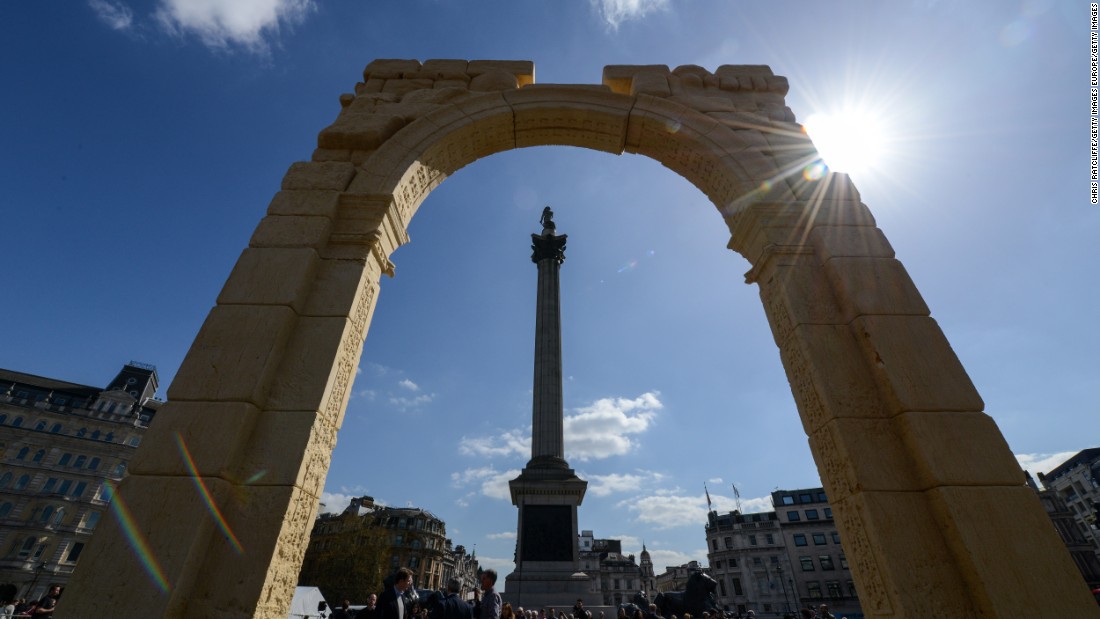 The Arch Of Baal In Ny

Even though Donald Trump is now the president of the United States, the globalists are far from defeated, and if they have their way all of humanity will soon be within their ruthless grip.

Michael Snyder's book entitled 'Living A Life That Really Matters' is available in paperback and for the Kindle on Amazon.com.

The Arch Of Baal New York

The Arc Of Baal

Subscription Special:Subscribe to Charisma for two years for Only $29.97 and get two free gifts. Gift #1 Chayil by John Eckhardt. Gift #2 Chosen by Michelle McClain-Walters. View Offer

The Arch Of Baal In The Bible

See an error in this article? Send us a correction