This is 'Michel de Nostradamus-The Man Who Saw Tomorrow' by Roar Hindi on Vimeo, the home for high quality videos and the people who love them. Nostradamus made his will on 17th June, 1566 and on 1st July sent for the local priest to give him the last rites, telling the man that he would not see him alive again. As he himself had predicted, his body was found the next morning.

The Man Who Saw Tomorrow is a 1981 documentary-style movie about the predictions of Frenchastrologer and physician Michel de Notredame (Nostradamus).

The Man Who Saw Tomorrow is narrated (some might say 'hosted') by Orson Welles. The film depicts many of Nostradamus' predictions as evidence of Nostradamus' predicting ability, though as with other works, nothing is offered which conclusively proves his accuracy. The last quarter of the film discusses Nostradamus' supposed prediction for the then future of the 1980s, 1990s and beyond. There are no scientifically testable predictions directly included in this film, only suggestions and allusions.

The film was produced and directed by Paul Drane for Australian Seven television network. It was hosted by actor John Waters. It set a ratings record, leading to a repeat broadcast two weeks later.

Welles, though he agreed to host the film, was not a believer in the subject matter presented. Welles' main objection to the generally accepted translations of Nostradamus' quatrains (so called because Nostradamus organized all his works into a series of four lined prose, which were then collected into 'centuries', or groups of 100 such works) relates in part to the translation efforts. While many skilled linguists have worked on the problem of translating the works of Nostradamus, all have struggled with the format the author used. 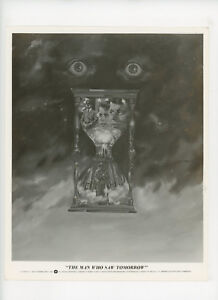 Nostradamus lived and wrote during a period of political and religious censorship. Because of this it is said he disguised his writings not only with somewhat cryptic language, but in four different languages (Latin, French, Italian and Greek). Not content with such obfuscation, Nostradamus is also said to have used anagrams to further confuse potential inquisitors (particularly with respect to names and places).

Welles himself completely rejected the central theme of the film after having made it. It is not known if Welles was contractually obligated to narrate the film, or if he simply grew disenchanted with its subject matter and presentation after completing it. Perhaps Welles' most public criticism of the subject matter of the film occurred during a guest appearance on an early 1980s episode of The Merv Griffin Show; 'One might as well make predictions based on random passages from the phone book', he offered when asked about the film, before moving on to discuss other projects more interesting to him personally.

Alleged predictions of Nostradamus in The Man Who Saw Tomorrow[edit]

On February 20, 1991, during the Gulf War, NBC aired a remake of this film, hosted and narrated by Charlton Heston.[1] Much of the same footage, voice acting, and musical score was retained from the original movie. Much of Heston's narration constituted a verbatim reprise of Welles' original presentation. There were, however, some significant differences between the 1991 remake and the original film:

The nature of the overall changes served the purpose of brevity, reducing an eighty-eight-minute film to a one-hour television broadcast, including commercial interruptions. Moreover, the predictions relating to the third tyrant were adapted to serve U.S. propaganda purposes during the then-occurring Gulf War. The severity of the natural disasters preceding the tyrant's emergence was reduced, as a worldwide famine leading to cannibalism, and earthquakes and flooding in various European cities, had clearly not taken place. Similarly, the severity of the third tyrant's war was diminished, omitting references to the conquest of Europe, nuclear war, and the destruction of New York City, as well as the prediction that the war would begin in 1994. Significantly, to avoid offence to Muslims, negative references to Islam, and references to the religious nature of the tyrant (calling him an Antichrist and a 'strong master of Mohammedan law') and his war were eliminated, as well as the portrayal of the then-current Gulf conflict as a religious war.

Although David L. Wolper was the executive producer of The Man Who Saw Tomorrow and arranged for the film to be re-edited into the 1991 television special, he was quoted as saying before the broadcast, 'If you're asking me if I believe any of this ... the answer is a most definite 'no.'[1]

Roger Ebert noted in March 1988 that Californians were renting the film based on its prediction of an earthquake in May, 2 months later. 'Sales clerks at the busy 20/20 Video Store on La Cienega Boulevard told me the tape is renting like crazy, and the overnight fee has been raised to $6, reflecting the demand. Spokesmen for Warner Bros Home Video confirm that 'The Man Who Foretold the Future' has emerged as a surprise hit from their backlist.'[3]

The San Bernardino Sun ran a piece that quoted, 'We have a couple of copies, and it's always gone. It's a non-stop rental,' said Keith Cramer, assistant manager at the Wherehouse on Highland Avenue in San Bernardino. 'Customers bringing it back say it's a pretty interesting movie. I've had a couple of people go so far as to say they're planning on it (the earthquake). One person even joked they were planning their vacation so they'd be in Arizona then.'[4]

In April 1988, the Los Angeles Journal, referring to earthquake predictions, quoted David Wolper as joking 'If the quake does happen, we'll sell a lot more copies, maybe enough to rebuild my house.'[5]

Regarding the 1991 edit, Variety TV wrote '[T]he special makes a halfhearted effort to cram current events in the Persian Gulf into Nostradamus' prediction of a third great tyrant (after Napoleon and Hitler). While Saddam Hussein stands a fair chance of wreaking the kind of global havoc supposedly forecast according to the earlier film, this special ignores some of the more apocalyptic scenarios of that '81 pic to focus unconvincingly on events to date. As is so often the case, Nostradamus' obscure quatrains are easily manipulated to suit the needs of the manipulators.'[6] 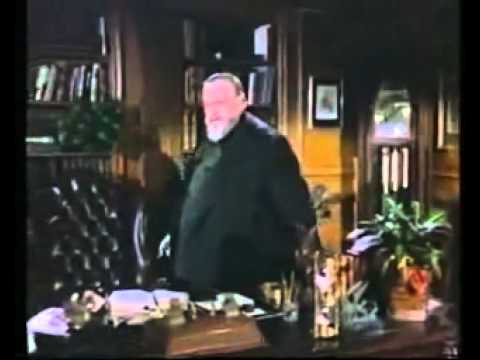 I guess my view of the prophecies of Michel de Nostradamus – the 16th century French prophet who is said to have written down accurate predictions of at least 2000 years of forthcoming human events – holds about as much weight as for me as The Da Vinci Code. There are a lot of holes in the Nostradamus’ predictions so I tend to chalk it up as nothing more than an interesting curiosity.

The people behind the documentary The Man Who Saw Tomorrow don’t seem to see it that way. Here is a movie that offers a tiny bit of biography about the supposed prophet, and then cobbles together footage from every source under the sun in an effort to prove his accuracy. Did he have fore-knowledge of the future? Did he, while sitting in his secluded attic room in the 16th century accurately predict The French Revolution? Napoleon? The American Revolution? The Civil War? Hitler? World War II? The Atomic Bomb? The Kennedy Assassination? The Moon Landing? Is he also right in his prediction about World War III and the end of the world? Well, I don’t happen to think so, but I am confused about whether the movie does. It spends 90 minutes reiterating that Nostradamus wrote down 2000 years worth of prophecies that came true and then adds a tag at the end to tell us that the producers of this film are actually less convinced of his accuracy than I am. At least they’re honest.

Hosted by Orson Welles, who sits in his stuffy office behind a desk smoking a cigar, The Man Who SawTomorrow attempts to lay out all of the major turning points of history by way of Nostradamus’ writing. Before diving head-long into his predictions, we learn that Nostradamus was a hard-working student who had ambitions to be a doctor, but after losing his family in the plague, turned his ambitions toward writing down his predictions in something called “quatrains’, and hid his verses in anagrams and secret code in an effort to avoid being prosecuted for witchcraft. Early on, we learn, he kissed the robes of a young Franciscan friar who would someday be Pope Sixtus V. He predicted that a king would die in a jousting tournament by having his eye poked out. Later he was invited to the home of a dignitary where he accurately predicted which pig they would be eating for dinner. Yeah . . . okay. 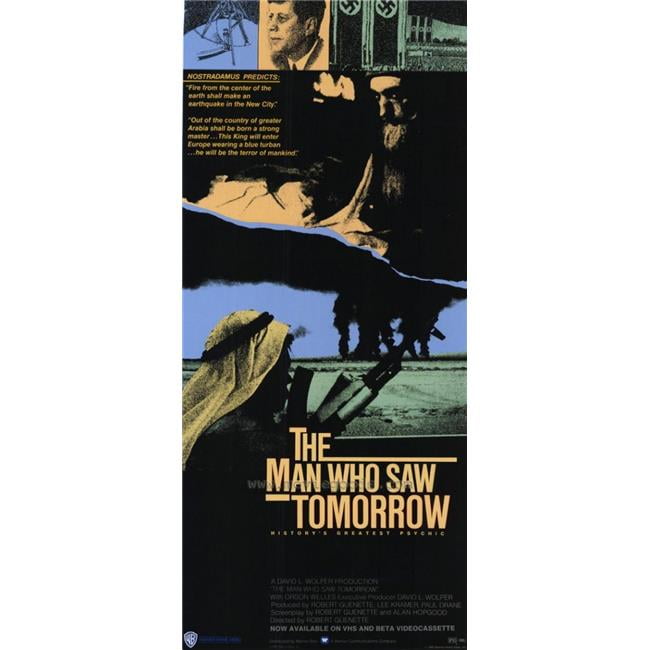 The historical predictions put forth by Nostradamus are interesting, but the methods in which the movie presents them are, in a word, baffling. Nothing is off limits here. There is footage of the Kennedy assassination, the holocaust, The Moon Landing, the revolution in Iran. Then, for events where there is no footage, sometimes actors are used in recreations and other times we get footage from old movies like War and Peace. Sprinkled into the mix also are old newsreels, short films, documentary footage, color illustrations and cheap special effects shots from old science fiction movies.

The only center of logic in this chaotic mess is a very brief interview with former astronaut Edgar Mitchell who argues that the future is nothing more than our summation of present events. I would have liked to have heard more from him and less from Jean Dixon, who appears absurdly satisfied that she predicted the deaths of both Jack and Bobby Kennedy. That’s before Welles informs us that we can see Nostradamus’ accuracy if we simply keep one eye on the quatrains and the other on our daily newspaper. For me, that’s just too much work. I think I’ll just let the future surprise me.

The movie also insists over and over that Nostadamus laid out a historical time line that revealed three men who would try to take over the world – Anti-Christs he called them. The first was Napoleon, the second was Hitler and the third is said to be a future tyrant who will come from the Middle East. This man, it is said, will plunge the world into a catastrophic war that will last 4 and 20 years, whatever that means.

That prediction lays out the film’s final act in which Nostradamus apparently predicted that a Middle Eastern Warrior in a blue turban would start World War III at or about May of 1988. That leads to an embarrassingly silly scene with cheap sets right out of “Battlestar Galactica”, with the governments of both The Middle East and The United States firing nukes at each other until civilization is obliterated. After that, the movie helpfully reminds us that Nostradamus predicted a thousand years of peace before the world ends in the year 3797.

The Man Who Saw Tomorrow is nothing more than a curiosity. Any attempt to take it seriously requires the kinds of fruitless insights than are often attached to things like The Da Vinci Code, Roswell or Bigfoot. I’m no skeptic but I had to smile at most of this. It is a professionally made film that probably takes its subject more seriously than it deserves. I find the predictions of Nostradamus to be a curious but not essential element to human history. He seemed to have a good track record even if he did predict that Ted Kennedy would become President of the United States in 1984. Hey, nobody’s perfect.

About the Author: Jerry Roberts

Jerry Roberts is a film critic and operator of two websites, Armchair Cinema and Armchair Oscars.